Shipping costs The price does not include any possible payment costs 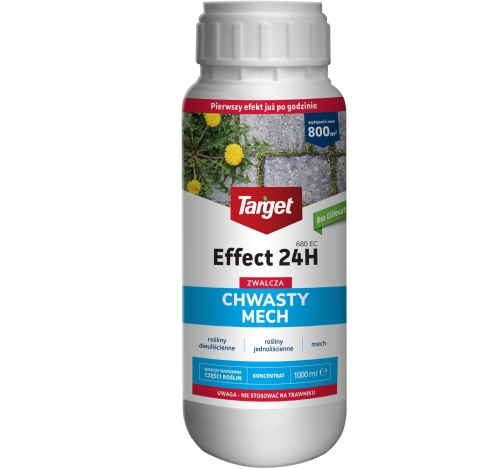 Darmowa dostawa
powyżej 200 zł
You have got 30 days to return the products, if they aren't good enough for you

30 days
for return
Gift for order above 100 PLN

Gift for
order above 100 PLN
Orders completed in 24 hours!

Delivery
in 24 hours
Gift for order above 100 PLN

Darmowa dostawa
powyżej 200 zł
You have got 30 days to return the products, if they aren't good enough for you

Effect 24h is an incredibly effective preparation for lividing stubborn weeds and moss in home gardens. Its innovative formula makes the effect of application visible already after 24 hours. It is the fastest herbicide effect that is currently available on the market.

The composition of the preparation is based on strong plant extracts, no harmful chemicals were used in the production. The main component of Effect 24h is nonanoic acid (geranium), which occurs in nature in the essential oils of geranium.

Effect 24h is the first preparation available on the Polish market, which is free of glyphosate (Roundup), so there are no harmful substances in soil and water. This herbicide is 100% organic, natural and safe for the environment, humans and animals. It is especially recommended for people who want to cultivate their garden in an organic way.

Very fast effect of application. Its action can be seen within a few hours, and the full herbicidal effect is obtained after 48 hours of application.
100% natural composition. The preparation is based on strong plant extracts, its organic origin guarantees safety for the environment, people and animals.
It does not contain glyphosate. It effectively combats weeds despite the fact that there is no glyphosate in its composition. As the first preparation free of harmful glyphosate, it gained the trust of customers.
It destroys only green parts of plants. Effect 24h destroys green parts of plants, thus not damaging lignified shoots, so it can be used in orchards or nurseries.
24-hour grace period. Thanks to the natural ingredients, its withdrawal period after applying Effect 24h is only 24 hours. Already on the second day children and animals can safely enter the treated area and fruit or vegetable crops can be harvested.

For weed control, 150 ml of the preparation should be dissolved in 2.5 liters of water. This amount is sufficient for about 100 m2 of surface. It is recommended to perform the treatment in the dry season in the morning. Sunrays accelerate the effect of herbicide.

Effect 24h can also be used to fight moss on hard surfaces such as: access roads, footpaths or sidewalks. The recommended dose is 50 ml of the preparation to be dissolved in 1.5 liters of water. This amount is sufficient to perform the treatment on about 100 m2 of surface. In this case, it is also recommended that the spraying be carried out in windless weather, in dry conditions and in the morning.